Domestic violence is defined as, “One individual systematically abusing another to gain power or control in a domestic or intimate relationship.” In relationships where domestic violence occurs, instead of both partners being equal in the relationship, the balance of power is uneven and the perpetrator tries to maintain control over the victim.

Abusive partners use a variety of tactics to exert power and control over their victims. They may use any, a combination of, or all of the following forms of abuse:

Often, an abusive partner will begin by using emotional or psychological abuse (such as name-calling or putting the victim down), and then escalate to other forms of abuse, such as physical violence. Typically, the violence starts off more subtle and then grows in frequency and severity.

The cycle of abuse involves three phases, including:

However, the violence does not end here. The cycle then repeats, over and over. 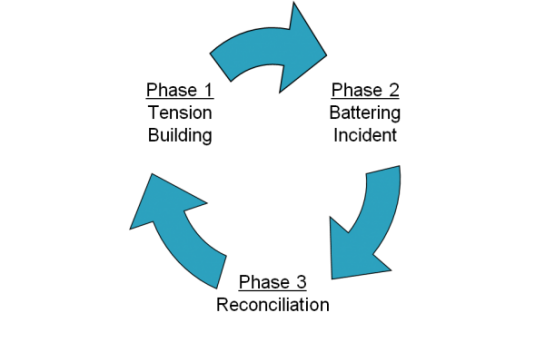 It is a common misconception that perpetrators just “lost control” when they emotionally or physically abuse their partners. However, this is not true. Domestic violence is the exact opposite of losing control; perpetrators know what they are doing and use their abusive tactics of choice to maintain dominance in the relationship.

Some common statements abusers may use to excuse or minimize the violence they perpetrate against their partners include:

Often, batterers have learned their violent behavior by witnessing or being exposed to domestic violence during their formative years.

The good news is, because domestic violence is a learned behavior, it can also be “un-learned”. With appropriate accountability measures and self awareness tools, abusive partners can go on to have healthy, respectful relationships if they accept responsibility for their actions, identify and challenge the belief systems which contributed to their unhealthy behaviors and learn healthy, non-violent ways to interact with their partners.

Because a perpetrator’s abusive behavior has often been learned over a period of many years, it can take a significant amount of time to change. As compared to Anger Management programs, Batterer’s Intervention is a much lengthier (minimum of 40 weeks) and comprehensive program which: